2 years ago by Pat Harig 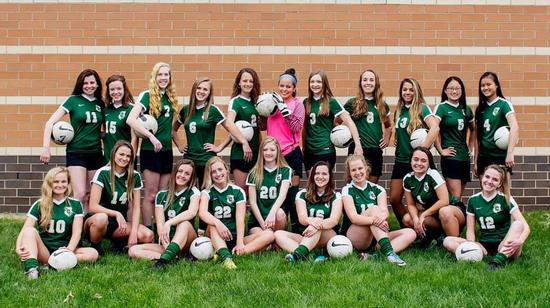 Coopersville played the last regular season game of the season tonight at home and came away with a 2-1 win vs. Allendale.  Seniors Gracie Becerra, Anna Burgess, Rylie Camp, Taylor DeWildt, Erin Mason, Grace Olthoff, Lanie Stream, and Molly Ward were honored with their parents before the game..

After much play back and forth the entire game, it came down to the final 10 minutes to determine a winner.  Allendale scored on a set play after a handling call against the Lady Broncos, but it was the Lady Broncos who stole the game in the final minutes as Katelyn Messock scored on a free kick from 25 yards out on a floating shot that went over the keepers head and sailed into the net for the tying score.  Then with 1:15 left in the game, Messock was fouled just outside the 18 line.  Coach brought Erin Mason up to take the free kick from her goalie position some 90 yards away, and Erin calmly drove the ball past the outstretched arms of the Allendale keeper into the far post side netting and the celebration was on with a stunning come from behind 2-1 win on Senior night.  Mason becomes the first goalie in Lady Bronco soccer history to score a goal while in the game as a keeper. The video of the shot can be found on our team page in the video section.

The team begins its quest for a District Championship tomorrow as they host Sparta for the opening round game at Coopersville.  Kick-off is at 5:30 PM.

YOUR GAME HAS CHANGED!